Yamaha / Euro-Unit at The Emperor Birthday

In Earth of Rising Sun emperor birthday is celebrated as a national holiday and the Embassy of Japan in Croatia for that occasion organized  celebration at the Westin Hotel in Zagreb. On this occasion of celebration gathered many guests from the world of politics, sports, arts and business people whose activity is part of Japan economy.

Traditionally on the celebration was called Euro-Unit as a general distributor of Japanese company Yamaha. Yamaha’s world-leading manufacturer of musical instruments and equipment, and the company Yamaha is one of the largest companies in the world. Euro-Unit has introduced its product portfolio on small exhibition stand, where they handed out fliers and brochures. The guests were met with numerous projects that we have successfully achieved in cooperation with Yamaha and the Japanese Embassy in Croatia. A special place was occupied with donations to various cultural institutions, scholarships for young musicians and successful organization and support to numerous appearances of Japanese artists in Croatia. During the grand banquet guests had the opportunity to enjoy music performed on our grand piano Yamaha C7.

Emperor Akihito is the 125th person that have imperial title by the Japanese traditional inheritance order. 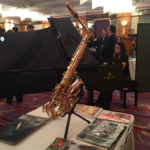 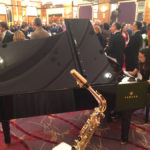 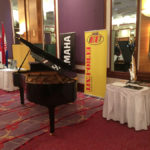